The Streetcar – 5 – On the back of branding

This is the fifth in an 8 part series on “The Streetcar”.

The streetcar will be one of four lines in the region that are heavily reliant on branding and advertising to stand out from the crowd and attract riders. The other three are the Southbank Shuttle, SORTA’s #1, and the 2X. I’ve touched on this idea before as it relates to the first two, so I do recommend you check out those links. Let’s try and unpack some of those thoughts here though and see how relevant they are to the streetcar. First, we’ll need to establish a baseline: what sort of advertising/branding treatment do most transit lines get? And then we can move on to what sort of treatment they might warrant.

Both agencies do some advertising for their services generally, but little to none for specific lines except for the three just mentioned.

SORTA places billboard ads, bus shelter ads, has booths at fairs and festivals, and buys various print advertising to promote several campaigns aimed mostly at getting people comfortable with the idea of using transit. They also have pens and keychains and stuff like that to hand out at events.

TANK doesn’t seem to do quite as much advertising, which would reflect their smaller overall size1.

Anyone who can find me a TANK balloon will get a cookie. SORTA: You need balloons too. Get with the program.

They do evidently have balloons which is pretty cool and they sponsored my transit map, getting their logo on the back. Also, because I really want an excuse to share this photo from their facebook page, I’ll tell you that they also seem to do some public events for charity.

So generally speaking, both agencies do things to keep their organization in the minds of their customers and supporters(pens and balloons and TANK-Man), things to gently reach out to people who are transit-curious(SORTA’s billboard ads)and obviously, things to give specific information to people who are looking for it(maps, schedules and websites).

Bus shelter advertisement for the #38X

…but they seem rare. This advertisement for the #38X is the only one I can think of so I guess it’s the exception that proves the rule. Only three lines really get a special treatment. Here’s a sampling of it:

The 2X becomes the ‘Airporter’

The Southbank Shuttle. I really like TANK’s photographer, whoever (s)he is.

And the #1 for fun (Not for serious use)

We have a few things going with these lines:

And really, it’s only these three. Other lines get ads all over their interchangeable vehicles, have no distinguishing marks except for the changeable electric signs, and are known only by numbers and sometimes an extension name like “17 Mt Airy”.

This is NOT SORTA’s Scientology line. it’s just the #11 wearing a costume.

The #4 doesn’t have a big permanent sign on it proclaiming it the ‘Norwooder’ (Hehe… Norwooder), it’s just the #4. That makes sense, too. Often it’s useful to switch a bus from one line to another, such that it might be the #4 coming into Downtown, but when that same bus leaves, it’s running as the #28 with a simple change to the sign. The number is an indication of a path that any given vehicle could follow. Marking up vehicles with special branding just means you can’t use them for other lines and ties your hands a bit when you’re planning schedules or even doing maintenance. Say you need 3 buses to cover a given route at the busiest part of the day. You have to assume that any one of those three could break down unexpectedly or need significant scheduled maintenance so you need to have four or more buses in the garage so you can always be sure of having three ready to go. If all your vehicles are interchangeable, you spread out the risk of a breakdown on any particular line and can have fewer extra vehicles sitting around just in case.

Anyway, back on topic! These three lines do get special treatment. I used the phrase “stand out from the crowd” earlier. That’s essentially what they’re trying to do and the advertising, often aimed mainly at tourists, can be pretty heavy handed. Here for example the rest of the system is completely ignored:

This map, from the Cincinnati Chamber’s free guidebooks to Downtown, while hard to read, shows only the #1 and the Southbank Shuttle. The guidebooks are all over the place, but are particularly present at places like hotels and the convention center. They’re designed for people unfamiliar with the City. In a word, tourists.

And here special signs make the Shuttle’s stops stand out quite a bit more than normal:

A crude measurement involving my computer monitor and a ruler reveals that the Shuttle literally gets more than 100 times more space on this sign than any other line. By the way, at this stop I’m pretty sure all of the other lines are going to Cincinnati and Covington too, but the sign totally fails to mention it.

The streetcar will likely stand out like this too. Every map of the route that I’ve seen has completely failed to acknowledge the rest of the transit system.

From the Cincinnati Streetcar Blog

People have held design competitions for the stops, each of which will be a large, expensive and highly visible change to a significant piece of the sidewalk rather than just another number on a post. 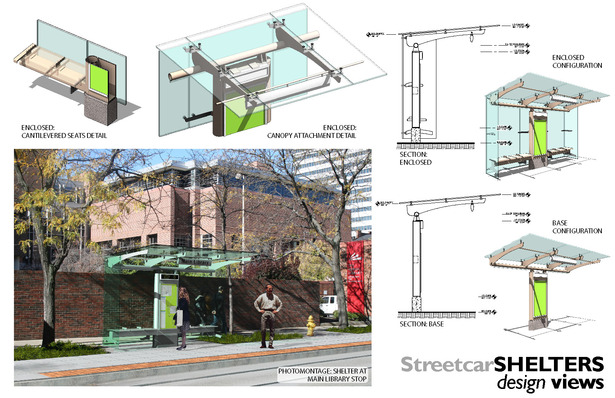 The stops that are already preemptively(and presumptuously) marked actually already have larger signs than most other stops. The streetcar doesn’t even exist yet and it’s more visible!

And then of course there’s the vehicle itself which stands out dramatically from the rest of the fleet and won’t likely carry any general advertising for Scientology or cars or other nonsense.

There is a problem with “standing out from the crowd”, and that’s the direct implication that the rest of the transit system is a “crowd”. To increase emphasis on one line so dramatically is to decrease emphasis on every other line.

For many people, the numbered lines(~97% of the system2) drop into a second category of “other routes” and the only lines they know are the ones that have distinct vehicles and maps that are highly simplified. The “other routes” all look alike, don’t tell you where they’re going, and are literally harder to spot. When we create such a distinct hierarchy, every visual cue tells people that the “other routes” aren’t as important, rather that the Southbank shuttle is very important and so is the streetcar. The shuttle may actually be important, but every other line is important too. Every parent thinks their kid is the center of the universe, but everyone who’s not a sociopath realizes that asserting just that to the kindergarten teacher would be way over the line. That is to say that their kid is not the center of the universe. They may feel that way, but they realize it isn’t actually true and that other children are equally important to themselves and their own parents.

Just so, this lopsided emphasis of some lines over and above others wouldn’t make sense if we assumed that all lines are equal. All lines aren’t equal, but not in a way that favours the streetcar. Some lines, like the #33, #17, #4, and #43 are significantly more important than the rest. They go more places, more frequently and as a consequence have many more riders. The corridors they form are critical for thousands of people every day. This just simply cannot be said of the #1 or the Shuttle, or yes, the streetcar.

So I think we’ve gone pretty far out of balance here. We have some lines that we’re effectively advertising to people as the only thing they need to know about, but none of those lines(I’m excepting the 2X from this now) is actually very useful at all in the big scheme of things. They’re really pretty minor routes and are so by design. I suspect that that actually may be why they get so much advertising to begin with. When we design a route with only a small subset of people in mind(say, tourists or yuppies), we make a line that is destined to have relatively low ridership. We most often see these lines designed to fulfil a political end3. I think perhaps that when people see the (structurally) low ridership of a less useful line they try to correct it in a way that’s familiar to the people who helped instigate it, that is, the people who applied the original political pressure. What do they think of first? Advertising. Branding. Distinction from that mess of “other routes” that they don’t actually understand very well. This is ‘their’ line in question, intending to serve people they know well, and they actually do know what reaches those people. So they make simple maps and big signs that ignore the rest of the system while explaining just one tiny part of it that they think is important to a particular group.

What’s perverse is that if they did understand the mess of “other routes”, in almost any case, they wouldn’t have proposed a narrow solution for a small constituency in the first place and it wouldn’t have needed the expense and sillyness of a distinct brand because it would have just been plainly useful from the start.

If most lines don’t need special advertising and branding, I think we need to ask ourselves collectively why only a few lines should get it and which those should be. I think we might also usefully ask why only some lines get a distinct brand when just about any line might benefit from it(Norwooder! :-P). It seems like the very strong brand and high level of visual distinction being created for the streetcar is probably in part a preemptive defense against the political embarrassment that would result from the naturally low ridership on a poorly chosen route.

9 responses to “The Streetcar – 5 – On the back of branding”